As this challenging week closes out, people still want to know how we’re managing here in the Hub.

My guess is that we’re doing as well as we can be, given the circumstances. Obviously, it would help if the background drone of media helicopters quieted, the sirens were fewer, and local traffic eased up, particularly as we try to get on with our lives and try to enjoy some normalcy. (Sure, if you’re like me, you may be a bit emotionally raw and frazzled, but that’s what comfort food and fine spirits are for; there will be plenty of that this weekend.) In spite of the situation, I think we’re doing pretty well.

The media continues to focus on our resilience as a city. (For those of you who don’t live here, we actually still consider ourselves to be a “town” as opposed to a “city.”)  Sure, maybe we’re setting a wonderful example for the world.  In more cynical moments, I wonder if the media is trying to spin any obvious positive about Boston they can come up with (aside from our sports team fanaticism). 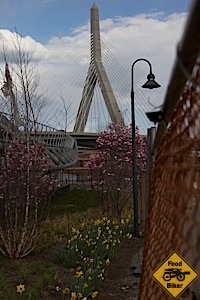 However, the media is actually correct in recognizing that we have a unusual resilience here; it’s unlike anything I’ve ever seen. You know that British WWII slogan “Keep Calm and Carry On,” that’s been especially popular this week on the Internet? Well, that’s pretty much how we roll here in Boston.

For years, I always admired the legendary ability of WWII Londoners who hung in there during the Blitz. With our collective courage having been put to the test this week, it’s clear to me that we embody that same spirit.

In fact, I’ve always seen Boston and London as sister cities, given our shared cultural heritage dating back two-and-a-half centuries. I’m sure that cultural anthropologists would be able to explain subtle and uncanny similarities between our two “towns,” including everything from un-navigable old-school street layouts with wacky rotaries, English street names and architecture, our accents (apparently the Boston accent derived from the English accent), and even shared colloquialisms such as a love of the word “wicked.” Maybe that British steadfast spirit remains in our collective consciousness centuries later.

Comedian Eddie Izzard once joked about having growing up in Europe, “where the history comes from.” Here in Boston, at times I joke to myself that Boston is “where the [American] history comes from.” We’re especially sad that the attack occurred during Patriot’s Day, which is supposed to be a fun day for kids and adults alike. We’ve got Revolutionary War re-enactments, complete with Paul Revere’s ride. We’ve got the big afternoon Red Sox game. Obviously, we have the Boston Marathon.

Nobody wants to work on Patriot’s Day, and it’s how we celebrate spring’s arrival. Unlike those in sunnier climes, we feel that we “earn” our warm weather, after typically suffering a challenging winter. Anyone who wants to bring forth malice and hate on a day where we, here in Boston, enjoy a bit of early spring fever, must have no soul to say the least. 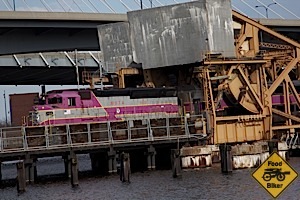 Life goes on. A few hours after hearing the bad news, I soothed my nerves by preparing a comfort food dinner of homemade chicken paprikash with wide egg noodles, roasted broccoli with garlic, and cracked open some really good American bourbon whiskey. At one point, I was amazed to find that the kitchen was clean, as I had been robotically cleaning everything without paying attention. The next day, a similar  same thing happened when dirty dishes seemed to magically disappear as I spaced out in grief. 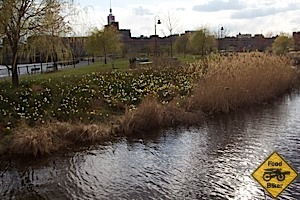 North Point Park and the Museum of Science.

On Tuesday morning, after very little sleep, I got up like the rest of Boston and got right back to work. When I’ve been unable to concentrate on the more thought-requiring work, I’ve thrown myself into more manual tasks. I’ve gone easy about taking motorcycle rides, as that’s something that requires one’s full attention to do it safely.  However, it really felt wonderful to get out yesterday for a nice long ride in the sunshine.

How are we doing here in Boston? We’re doing okay. Really. We’re keeping calm and are carrying on.

Because, that’s what we do.