V is for Vermouth 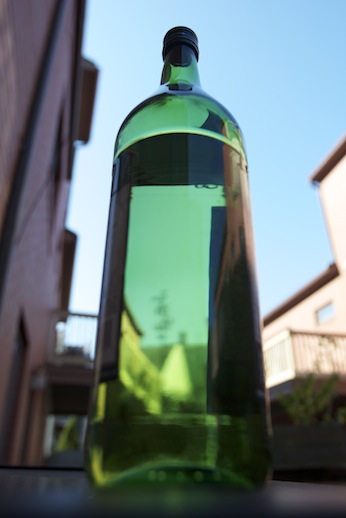 What do you have when it’s 10am and you’re out of dry vermouth?

No, not a drinking problem……a cooking problem! You see, dry vermouth isn’t just for making a Martini or a Gibson. It’s your secret cooking weapon: A magical elixir that turns a boring chicken breast into food of the gods in under thirty minutes.

So what is this liquid cooking gold, you ask? Well, it’s simple: Fancy wine.

Dry vermouth is merely white wine that has been monkeyed with! Manufacturers start with a basic white or red grape-based wine, and then add a bit more alcohol (making it a “fortified wine”) and other extra stuff that can include anything from roots (like ginger) to barks (such as cinnamon) to flowers, seeds, herbs, or spices. And if you’re wondering about the “dry” part, that has to do with sugar content. Most “dry” vermouth is usually white and has not more than 4% added sugar. (Sweet vermouth is usually red and can have as much as 10 to 15 percent added sugar.)

There’s one especially cool fact about dry vermouth. Unlike a bottle of white wine, which at most will have a refrigerated shelf life up to two weeks, dry vermouth generally won’t spoil at room temperature. This means you can just buy a bottle and keep it close at hand in your kitchen for those moments when you need it.

On average, a 750ML bottle of dry vermouth should set you back no more than $10. So once you have a bottle purchased and in-hand, and stowed in a within-arm’s-reach location, here’s something you can do with it:

First, dice an onion (shoot for a small dice here). Then pour a little olive oil (EVOO is unnecessary for this application) into a standard (not a non-stick) sauté pan, and heat it over medium-high heat until the oil begins to shimmer. Add the diced onion, and sauté until golden brown. (Keep those onions moving, folks! Watch those onions! Don’t let ’em burn! CONSTANT VIGILANCE!) Now, plop your boring, Tuesday night boneless chicken breast (that you’ve seasoned with a little salt and pepper, and then dredged in flour) on top of your now-golden brown onions. Cook that chicken-y goodness until it’s reached an internal temperature of 165ºF, and the chicken is golden brown. Then remove the chicken from the pan. (Yes, you have to put the chicken down on something. Don’t just hold it in the air. Just have a plate or a bowl handy.)

Now get ready to remove the yummy browned and caramelized bits created by the alchemical magic of the Maillard reaction that occurred between the sugars in your chicken, flour, and onions by grabbing your vermouth and pouring some (a cup, half a cup…whatever) into the pan! Stir it all up with wooden spoon. Keep stirring the saucy, onion goodness, cook it a bit longer, and then repatriate the patiently waiting chicken into the sauce.

So go ahead. Spend $10 on a bottle of dry vermouth, and deglaze away.

And maybe, grab some cocktail onions and make a Gibson while you’re at it.

← The Roots of My Rides
From Sandy Land to Candy Land →