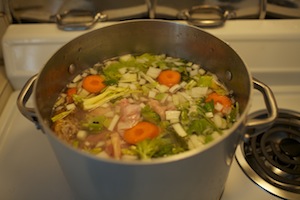 Making chicken soup or stock doesn’t have to be difficult, especially when you’re sick at home.

Springtime can bring surprises. New Englanders really appreciate the first few days of sixty-degree temperatures, particularly after a long, hard winter. You can imagine that it’s incredibly frustrating to be sick at home with a nasty cold or flu on the first, warm sunny days of springtime, when it sounds like the whole world is waking up outside and you’re stuck in bed. When I really want to be cruising down the street on my motorcycle, instead I’m fitfully snoozing under the covers, with crumpled tissues strewn about.

However, I have a secret weapon that is so stupidly simple to make that even someone sick at home should have little problem to throw together in about ten minutes. 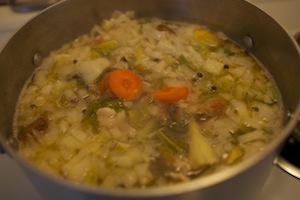 You want it to simmer. NOT boil.

It’s chicken soup. Lovingly referred to my many as “Jewish Penicillin,” for ages people have known that eating homemade chicken soup is a good thing when you’re sick. There are studies that show that chicken soup can be a help, and obviously it’s nutritive. Heck, even back from my medical school days I remember some random fact about chicken soup being “osmotically correct,” meaning that it’s close to the same osmotic concentration as your own. This is important, as chicken soup does a tremendous job of helping rehydrate you, which is what you really need when you’re sick.

People often ask me for a recipe for chicken soup. Like a lot of cooking, I’m happy to say that it isn’t rocket science, and you don’t need to buy cans of crappy, over-salted canned soup that won’t hydrate you as well (or taste as good) as the homemade stuff. This is a throw-it-together in the pot sort-of-thing (believe me when I say that you really don’t want to be worried about exact proportions when you’re sick), and you’re back in bed in a flash while the soup or stock slowly simmers away on the stove.

Like most dishes, I want readers to focus on the techniques involved, as opposed to focusing on the recipes themselves.  The word of the day is SIMMER.  I’ll get to that in a minute. If you forget everything else in this article, I just want you to remember the word SIMMER.  That’s important.

How do I myself make chicken soup (or stock?)  Here’s the general idea. I throw the following items into a pot:

I fill the pot with water, I cover it, and bring it to heat no higher than a SIMMER, and let it go for at least two hours. For chicken soup, I’ll serve the strained broth with the meat.  For stock, I’ll pitch everything except the strained broth. Season with salt and pepper to taste.

What’s the big deal about SIMMERING? The key here is to bring the temperature of the soup/stock where small bubbles come up to the surface. At this point the temperature should be 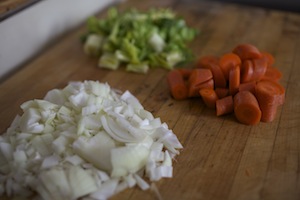 somewhere between 180F-200F or so. The key thing is that you don’t want to ever let it get it up to a rapid boil (212F), or the soup/stock will turn cloudy, and it will look pretty unappetizing. 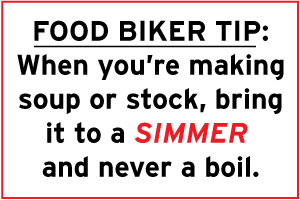 Okay, some of you are already raising your hands with questions. Here we go:

Again, chicken soup or chicken stock isn’t rocket science. It’s the ultimate “dump-and-stir” thing, which is what you really want and need when you’re sick.

Debone a whole chicken, freeze the meat, and save it for another night’s dinner. Throw the rest in the pot.

So remember: Keep it to a SIMMER (not a boil), keep hydrated with soup and lots of fluids, take two aspirin, and call me in the morning.

← Downhill From Here
We're Okay, Thanks. →