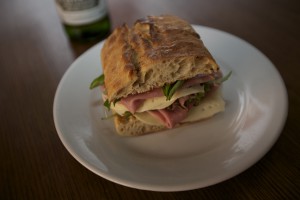 We’re back with Day 2. This time, I’ll try not to eat it before shooting a photo. Sorry about yesterday.

I think that I forgot to mention that I had used a bit of Penzey’s “Sandwich Sprinkle” yesterday, in addition to a bit of salt and pepper. Forgot to add the S&P today, but you don’t really need the former if you’re using the “Sandwich Sprinkle.” Other than that, it’s the same sandwich we’re talking about.

I usually don’t enjoy lunch re-runs, but I passed on the leftover chicken picatta from last night as this was calling.

Now…Why in the world would anyone care what I’m eating for lunch?

Would it make a difference that in the background, is a bottle of Laphroig “Quarter Cask” single-malt whiskey? In addition to complementing this brawny sandwich with smoke and vanilla, you should probably know that the tiny taste of it is psychologically soothing my nerves right now as our new neighbor’s dog next door won’t stop barking and whining. I bet the dog is stressed out, and could probably use some whiskey itself.

Realistically, I can’t say that I frequent a weekday cocktail during lunch when I’m alone, but maybe it’s a good idea after all. I just started watching Mad Men (Season 1) and maybe those Ad-men back in the ’50s had the right idea all along. A mere sip or two won’t kill you once in a while midday, and can blast the flavor out the window.

No, this is not the best food photography ever. I screwed around with the sandwich layering, so it isn’t the prettiest. Additionally, I’m generally from the school of though that sandwiches should be minimalist at best, particularly if you’re showcasing the best bread that you can find.

But basil, fresh from your deck garden, changes everything…particularly on a sandwich. Cheers.