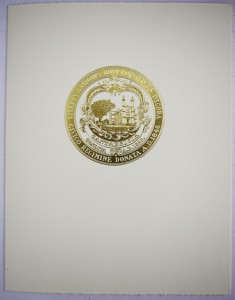 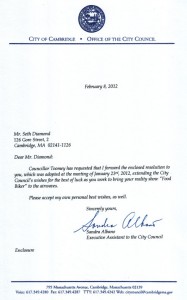 Even the City of Cambridge is cheering me on.

On Friday evening, coming home after a long and exciting week, there was an oversize envelope awaiting me in the mailbox.  I wasn’t expecting anything in the mail, and the return address was from the Cambridge City Council at City Hall.  I didn’t think I had any outstanding parking tickets or City of Cambridge excise taxes due (at least yet), and I’ll admit that I was a bit puzzled what it might be.

Maybe it was solicitation for a small business program from the City of Cambridge?

Well, was I in for a surprise…

I carefully opened the envelope, and there was a letter and a beautiful folder waiting inside, complete with carefully roughly cut edges.

What was in this envelope?

Well, apparently, someone on the City Council must have read the Boston Herald article on Food Biker, as they decided to pass Resolution #55 of 2012, wishing me the best of luck on pursuing Food Biker.  In the folder was a beautiful letter, complete with a seal and ribbon, with the details of Resolution 55 (Resolution #29 of the January 23rd session).

You can’t make this stuff up. Ellabelle and I haven’t even left the driveway yet, and even the City of Cambridge government has heard of my dream project and is cheering me on.

I’m just stunned, and I both hope and pray that I don’t let anyone down.  Heck, aside from hopefully achieving some of my goals, I’m hoping that whatever comes of this will at least wind up being entertaining for everyone in the end.

Feeding someone is a very intimate and powerful thing to do. But if you do it exceptionally well, it can make someone incredibly happy.  That’s a key reason why I had decided to go pro with regards to entering the culinary world. With my training, I’ve now learned how to do the latter consistently through cooking… and I’ll always be learning.

Following my dream of Food Biker is about “doing good” in the world, and hopefully make people happy as well in the process.

I just ask that someone, please smack me with reality, if I ever become one of those whiny, self-indulgent people whose head swells to the size of Texas after a little bit of media attention.

Again, this was a huge honor, and this definitely follows up on “Local Boy Does Good.”  Cambridge is a major city, and I’m thrilled that people who I don’t know believe in me and my adventures that lie ahead.

As cheese-ball as it sounds, I just hope that I can be a wonderful culinary and motorcycling ambassador for my city, my state, and as an American overall. Yeah, it’s something one might say at as a Miss America contestant…but I honestly believe that the best of America is built on a little bit of civic pride.

I can promise everyone one thing: I’ll be sure to give it my best shot.

(And to you Ron Burgundy fans out there…Stay classy, Cambridge.)