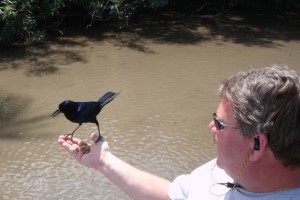 A bird in hand is worth a whole lotta’ Motzie.

Alex “Motzie” Motz helped teach me a bit about what it means to be a part of a universal motorcycle brotherhood.

Motzie had been riding his motorcycle near his home in Mississauga, Ontario (that’s near Toronto, Canada) and a driver took him down while he rode his BMW R1200 GSA.  Motzie passed away as a result of his injuries. We will all miss him. 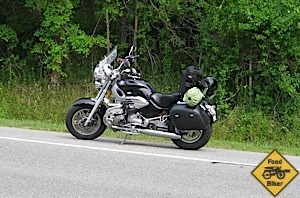 I knew Motzie from a wonderful band of brothers called Chromeheads, a fun bunch of motorcycle enthusiasts that are passionate about BMW R1200C and R1200CLC motorcycles, which are the only cruiser bikes that BMW ever made. Manufactured from 1998-2004, they’re quite atypical of BMW bikes, as the majority is designed for touring or racing. The “C” rides like a touring bike, disguised as a cruiser, so you get the best of both worlds. A lot of people have motorcycle clubs based on location and region, but we’re a tight virtual club that’s online without dues or central headquarters. Frankly, this love of the R1200C brings all of us Chromeheads together online, and also in person for rallies, tech-days, and rides wherever and whenever we can. Our online names or handles are our nicknames (Formerly Thoomp!, I’m now known as Food Biker; you can guess that Alex Motz was lovingly known as Motzie.) If it wasn’t for this wonderful group, who the heck knows if I’d even be doing Food Biker™ today. In this digital age, online virtual clubs have become a new phenomenon, and are just as valid as more traditional ones.

Years back, on the Chromeheads website, I was first learning all about “C”s and was looking to purchase one. I first met Motzie when I phoned him up in Canada, as he had a R1200C bike for sale and I was considering purchasing it. A simple phone conversation turned into an hour-long bull session about all sorts of motorcycle advice and other fun stuff. I subsequently learned of the growing legend of Motzie, as apparently he was a central part of the whole Chromehead scene. Through photos and accounts, Motzie was repeatedly the life of the Chromehead gatherings, to the point where a phrase had been coined “I’ve been Motzified.”

As someone who likes to throw down and party, you can imagine that at some point I simply had to meet this guy.

Fast forward a bit, and at some point I realized that I wanted my motorcycle mufflers to have a bit more “bark” to them, yet not so much that it would annoy neighbors or passerby.  Additionally, given that stock R1200Cs are a bit spartan, there was no clock or tachometer included on the bike and I had heard of an aftermarket chrome housing where I could do a bit of DIY installation with similar BMW parts, and make it look like it was stock. 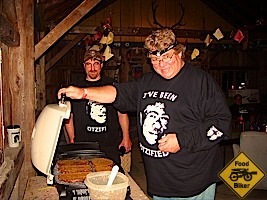 Motzie at the Grill. (Check out the T-shirts.)

That’s when I phoned Motzie up in Canada, as he had the last Z-Tech™ aftermarket mufflers and clock/tach housings available for the R1200C, as they had been discontinued. Phone calls to Motzie to buy more motorcycle farkles quickly turned into more extended fun phone sessions. Motzie became a fast friend of mine via phone, email, and the web, never mind the fact that we never met face-to-face. I could sense over the phone that Motzie was really the stuff of legend that brotherhoods revolve around.

Fast forward again a few years, when a whole pack of Chromeheads met in Lincoln, NH for an annual summer rally called “The Rambling Pig.” It was the first time when I personally met fellow Chromehead friends in person, and I heard that there was a good chance Motzie was going to be able to make it. I couldn’t wait to meet him.

Well, the annual “Rambling Pig” was a blast, with great rides, great food, and great people. However, upon arrival, I was disappointed to hear Motzie couldn’t make it due to a recent shoulder injury. After snatching the annual bottlecap snapping/flinging contest title from Green Mountain Cruiser, I remember having the very late-night (and very Laphoraig™ whisky fueled) bright idea to see if we could get Motzie on the phone – even though it was wicked late. I had asked if anyone had his phone number handy, and sure enough we quickly reached him via a cellphone on speakerphone. Under the stars and beverages in hand, the few of us remaining (Rocketman, Oceanman, Enfoman, Fleetwood72, and myself) talked to Motzie out in the motel parking lot while the rest of the gang had gone to bed.

Motzie, a large, powerful guy you’d want on your football team, apparently had shoulders so wide that apparently he couldn’t fit into his local Canadian MRI for imaging. He explained to us that he was scheduled shortly to cross the border for an open MRI available in the USA per his shoulder injury. Per my phone conversations with him, I certainly remember giving Motzie a playfully hard time about all sorts of things, and like a champ he gave it right back to me in spades. God love the man. If he had been able to make the rally in person, he certainly would have been “trouble with a capital T,” as I had expected.

Sure enough, an hour later I was still out there shivering, with Enfoman, Fleetwood72, and myself as the last men standing, thoroughly unable to get off the phone with Motzie. We were having too much fun. With his own drink in hand up in Canada, Motzie was helping us close out our party and was living up to his legendary Chromehead status. It was a perfect moment that I’ll never forget.

Finally, from a Food Biker™ connection that I only learned after his passing, Motzie was apparently renowned for grilling his biker friends thick slabs of marinaded rye bread from Toronto, which were lovingly known as “Rye Steaks.” To this day, I regret not having taken up his repeated invitations to ride up to him and visit in Ontario, as life does get in the way. However, the fact remaining that he left us after having done something that he so passionately that he loved, will hopefully offer some of us a bit of solace.

Does it scare the heck out of me that my friend was killed in a motorcycle accident?
Of course it does.

Do I feel like shouting at everyone driving a four-wheeled vehicle to be super-careful and to keep their eyes out for motorcyclists?
Sure.

Will I stop riding?
No way.

Will I continue to do my best and manage my risks?
Certainly.

When I’ll see the sunshine bounce off my chrome clock/tach assembly or my final drive cover, or when I roll on my motorcycle Ellabelle’s throttle and there’s a bit of a satisfyingly rumble there, warm thoughts of Motzie will surely spring to mind. I badly want to believe that motorcyclists who have passed on watch over those of us still on the road having adventures, and I hope that Motzie will be right there with me, wherever I go.

Motzie, thanks for showing me that the bonds of motorcycle brotherhood span both time and place. You will be missed by us all, my friend.