By posting about a major restaurant chain such as Friendly’s, I’m aware that I’m putting my culinary reputation at stake. Don’t worry, dear reader. I make it a habit of frequently supporting small, local restaurants and purchasing my goods from local purveyors.

However, I’m never one to be pigeonholed into a particular culinary category as I’d never want to be accused of being some sort of culinary snob or elitist.

Life’s too short to not eat what you enjoy, right? Eating a culinary treat from a major chain, albeit once in a blue moon, really isn’t the worst thing in the world you can do.

A few years ago, I had heard that Friendly’s was filing for bankruptcy, and was immediately shuttering many of their restaurants in the Northeast, I was heartbroken. With the very future of the chain’s very existence hanging in the balance, I actually panicked for a moment.

What world would this be, where one could no longer procure a “Fishamajig?” The humble grilled cheese sandwich, elevated to it’s glory with a breaded and deep fried fish sandwich and a little bit of tartar sauce? Trust me. This seems easy to replicate, but I have never been able to successfully replicate the fish used, despite various attempts of using homemade and pre-breaded “white-fleshed” fried fish.

I’ll be quick to admit that a “Fishamajig” and a chocolate malted is comfort food to me, going all the way back from childhood. Heck, my Grandpa Willie took me to Friendly’s when I was a kid, and I remember that’s where I first tried New England Clam Chowder with crushed saltines. When it comes to “faster food,” what else could be more comforting than a griddled sandwich, such as a Fishamajig? Is Friendly’s just another casualty of the crappy economy? Surely. Today, not everyone wants to pay $12 for a small sandwich, fries, and a malted (before tip) for lunch. Rising food costs are killing restaurants left and right. People still pony up for “dollar” value-meals at fast-food joints, when feeding the kids.

What does this mean? It means more lost jobs. Many people in such places are getting hurt…particularly young Americans who wait tables for their crappy, part-time jobs. These are the people who don’t have a lot of money to start with, and are doing things noble things like saving for their education. 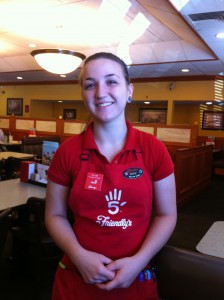 Take “Essie” (Esther) Romanik, who was my server on Monday at the Watertown, MA location. (It’s a neat coincidence that her nickname parallels the German/Yiddish verb, “essen,” meaning “eat”  Essie is young, outgoing, and is developing incredible ice cream flavors with her boyfriend using a small ice cream machine at home. If all goes well, the two of them hope to start their own homemade ice cream business in a few years.

But if people like Essie lose their jobs, how can they move forward with their educational and career goals?  Waiting tables for a large restaurant chain can be an incredibly demanding job, with low tips and demanding customers. At her age, I myself had a crappy job in high school, delivering Chinese food to wealthy NY suburbanites. One thing that hasn’t changed, is that people generally don’t tip well as one might think.

Again, Friendly’s is not “high” cuisine of any standards. But I’ve never really lumped it in with the huge “fast food” chains. It isn’t health food, but depending on what you order, Friendly’s New England, soda-fountain style fare, still shows through on the menu.

Frankfurters are served on New England-style rolls that have been “girdled” on each side. Heck…Any sandwich that is toasted in butter (like French toast) on the griddle is going to create a tastier treat, given the more complex molecules created in the browning process. That’s part of the magic. Eventually, once I moved to Boston full time, did I fully understand that there was a method to the madness of a “New England”-style hot dog bun…meaning browning on the sides and bottom of the bun. I finally fell in love with it and never looked back. Can one be disappointed about the potential loss of a large chain restaurant, or even a restructuring and a loss of its overall charm, character, and menu? Absolutely. Restaurants like Friendly’s are regional (not global) phenomena, and are a huge part of America’s culinary history of the latter half of the twentieth-century. It fills the niche between true national fast-food chains and small mom-and-pop enterprises. To me, it’s a part of my childhood and my own culinary past. It isn’t health food, but it’s more wholesome than what you get at the drive-through. Interior of Friendly’s in Charlestown, MA. Closed for good.

Again, the days when my Grandpa Willie used to take me to Friendly’s for their New England Clam Chowder are long gone. However, the memories still remain.

I say this…go buy your kid a “griddled” sandwich and an ice cream. Maybe we can support this New England institution from losing what makes it special, and in the very least bit – maybe you’ll make a memory or two of your own.