In addition to focusing on the culinary world, Food Biker covers the current motorcycle scene and fascinating motorcycle subcultures in America. Join us as we explore motorcycling trends in America today.

Why do some people ride what they ride?  Is it about the country of origin of the motorcycle (American, Euro, Japanese…), the style of the bike (cruiser, touring, sport…), the styles (new, vintage, custom…), or is it something else?  We explore these and other questions.

Meanwhile, all these different motorcycle cultures and riders are united, in that they all have different and fascinating stories to share here in America.

Besides, most riders will agree that they ride for the rush of moving at high speeds, with nothing physically separating you between yourself and the rest of the world.  Topped off with the feelings of personal freedom and adventure experienced out there on the open road, riders generally agree that America is a great place to ride and explore. 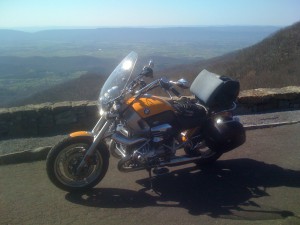 The motorcycle star of Food Biker is Ellabelle (Fr: “She is beautiful”) is a 2002 R1200C Phoenix, named after cruising through Ellabell, GA during the first solo journey. The R1200C is the only cruiser that BMW ever made, but has the functionality and comfort of a touring bike that can take you all around the country.

This shot of Ellabelle was taken on the famous “Skyline Drive,” in National State Park during the second solo journey.

Ellabelle’s older sister, and Seth’s first bike Etienne (Fr: “Stephanie”) is a 1976 BMW R75/6 touring bike, that was modified slightly into a “café racer.” Given her age and current condition, she appears as a guest star for local episodes.