1962 – John Steinbeck shows us the faces of America in Travels With Charley, one of the seminal American travelogues of the twentieth century.  Steinbeck drove a GMC truck and camper he names “Rocinante,” after Don Quixote’s horse.

1969 – Dennis Hopper and Peter Fonda star in Easy Rider, widely regarded as the first independent film, chronicling a fictional road trip from California to Louisiana. Both motorcycles were custom choppers made for the movie.

1974 – After 121 rejections by publishers, John Persig publishes Zen and the Art of Motorcycle Maintenance, a best-selling novel, based on a true philosophical and spiritual motorcycle journey taken in 1968 from Minnesota to California.  Admittedly this important work fixes on philosophy, the road-trip inspiration still exists.  Persig rode a 1964 Honda Superhawk CB77, and his friend rode a BMW R60/2.

1982 – William Least Heat Moon writes Blue Highways, a paean to the back roads and jade green Hamilton Beach malt machines all across America.  Least Heat Moon drove a green van he outfits as a camper that he names “Ghost Dancing.”

1996 – Two Fat Ladies debuts on BBC, a series chronicling the adventures of two women in a motorcycle and sidecar, as they joyfully cook their way around the U.K. (and Ireland in one episode).  The ladies rode a Triumph Thunderbird, coupled to a Watsonian GP-700 “doublewide” sidecar.

2004 – Ewan McGregor and Charlie Boorman film The Long Way Round, a mini-series adventure around the world longitudinally on BMW R1150GS Motorcycles, exploring cultures all around the world.

2004 – Hairy Bikers debuts on the BBC, telling of the encounters of two BMW riders who cook and travel around the UK.  The gents rode a BMW R1200GS, a BMW F650GS, and a Triumph Rocket III.

2007 – Ewan McGregor and Charlie Boorman film The Long Way Down, a mini-series adventure from Scotland to South Africa on BMW R1200GS Motorcycles.

2007 – Alton Brown films Feasting on Asphalt: The River Run, a mini-series chronicling the culinary motorcycle trip up the Mississippi River from Louisiana to Minnesota.  Brown rode a BMW R1200GS. 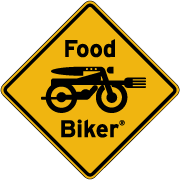 2009 – Seth Diamond begins work on Food Biker, embarking on the next series of culinary motorcycle journeys across America, meeting with and learning from our country’s most inspired chefs and culinary experts to help you improve your culinary skills.  Seth rides a 2002 BMW R1200C cruiser named “Ellabelle.”