Bread. Mankind’s favorite staple for millennia. Brought to you by the protein GLUTEN.

A few months back, I went to Patisserie Lenox’s Great Barrington outpost for a light lunch of coffee and the perfect Croque Monsieur. At the counter were baskets heaped with beautifully prepared croissants, danishes, and other laminated-dough pastries, Madeleines, brownies, the ubiquitous pastel macaron—all of it looked wonderful. I had such respect for the care, time, and hard work that went into creating those things. I know how hard it is to turn out that kind of traditional pastry, so I  was flabbergasted when a patron walked in and asked the counterperson, “Do you have anything that’s gluten-free?”

So, as both a chef and a former medical student, I’m often asked about what I think of the latest eating mode du jour, like gluten-free. Or Paleo. Or clean eating. Or juicing. The list goes on.

Let’s start with gluten-free, something that’s gained considerable momentum lately. First, what is gluten, anyway?  Gluten is a protein comprised of gliadin and glutenin, and it’s found in foods processed from wheat and grains including barley, rye, and spelt. Long story short, when you add water to flour made from these grains, and then physically manipulate the resulting dough, gluten strands form, creating a strong, webbed network. Add yeast to the whole magilla and the yeast will munch on starches contained therein, belch out carbon dioxide which gets trapped by the gluten strands, and quite literally POOF! Bread dough rises.

Now, about that whole gluten-free diet thing….proteins are notorious for man-handling your immune system and inducing allergies or sensitivities. However, the odds are startlingly low that you (or most folks) really need to be gluten-free because of an allergy. The key immune response to gluten is Celiac disease (see also gluten-sensitive enteropathy or celiac sprue.) In 2002, the estimated frequency of Celiac was 1 in 3000*. That’s 0.03% gluten-sensitive enteropathy. So for every 2,999 people reading this, you don’t need be on a gluten-free diet. (And while more recent figures from a 2012 study put Celiac frequency at 0.71%** of the population—a slight increase—it’s still only a 1 in 141 shot that you have Celiac. I know folks who have Celiac and it is a cruel condition. I genuinely feel for them.)

Okay, fine, so, you probably don’t have Celiac. Do you eat pasta or uncultured white bread (bread not made with a long-fermentation starter, like sourdough bread) and feel bloated and unwell? Could you have gluten sensitivity? Yes. (It’s entirely possible you ate too much, too.) But let me say this again: Is it possible you are gluten-sensitive? Yes. How do you know you are gluten sensitive? Because you have been to a trained medical professional and had allergy and sensitivity tests. That is the only way to know if you are gluten-sensitive.

So if you want to know—really know, definitively—about gluten-sensitivity, visit your primary care physician, or an allergist, and prevail upon the wonders of medical science for allergy testing! Don’t have the time, energy, motivation to do that and think you’re doing better eating fewer refined, simple carbohydrates? Great. Good for you! But that does not mean you have to go gluten-free and/or are gluten-sensitive. What I would posit is that insulin receptors are saying, “Thanks!” Today’s abundance and availability of easily digested, over-processed, simple carbohydrates mean that your body is probably experiencing insulin spikes. By switching off of simple carbohydrates (like those typically found in pasta and un-fermented white breads) you’ve likely eliminated some of the insulin spiking and feel more energetic, less logy, etc. And that’s great.

But that still doesn’t mean you are gluten sensitive or have Celiac. 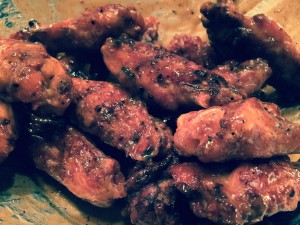 Grilled Buffalo wings. You don’t have to do Paleo or Atkins if you occasionally want an all-protein dinner. Just try to aim for pasture-raised chickens and don’t eat wings for dinner every day!

So, why do I think that there’s quite a bit going on around gluten-free? Well…. 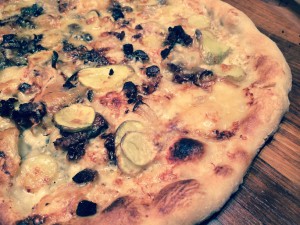 Will the dough of this Savoyard pizza going to give you problems? For someone who really has Celiac, it will.

Again, if you really think you have Celiac or a high gluten sensitivity, please go see your primary care physician. Don’t self-diagnose. Instead, collect empirical evidence, with the help of your friend called “Science.”

← Back To The Show!
The Cookbook Conundrum →