However, you can make a relationship work where your significant other is a “Team Cake” kind of person.

Just be sure to bake them a coconut or chocolate cake once in a while, and harmony will ensue. Don’t forget that cheesecake is often a good common ground for mixed “pie and cake” relationships.”

Q: What do you think about driving, as opposed to riding?

A: Food Biker is also about cars, in addition to motorcycling via Restaurant Racer. Although I’m obviously a motorcycle junkie, I’m not a snob about it.  Some motorcyclists just hate cars, and they’re missing out.  Frankly, I’ve been a “petrol-head” since childhood.  Blame that on my father, who drove a ’72 Corvette Stingray and a series of mid-‘70s BMWs and sold them before I got my driver’s license.

Heck… Sometimes I even miss my first car… A beat-up…sand-colored… 1976 Pontiac Catalina Station Wagon…which was a spitting image of the “The Family Truckster” in National Lampoon’s Vacation.  I remember that you couldn’t unlock the passenger door if it accidentally locked, and you would get carbon monoxide poisoning when you sat in the “way back” seats.  Probably explains a lot why my brain works the way it does. 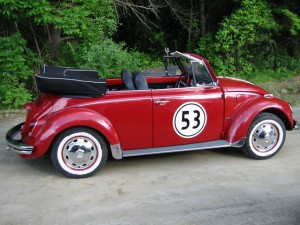 After all… Tomorrow’s “classic” cars don’t need to be expensive, and fixing an old car yourself is an educational, empowering, and downright therapeutic experience.  Too bad that so many modern cars require professional assistance.

One of my impossible dreams would be to somehow go back in time and appear on a classic “Top Gear” and do the “Star in a Reasonably Priced Car” bit.  I’m sure I’d screw it up just horribly, as I still take my corners way too wide.  On the bike, I still hardly lean as far as I could or should.  I would have loved to talk to The Stig, even though he was never a man of many words.

Q: What do you think about competitive cooking shows?

A: I know a lot of people enjoy them, but I genuinely prefer watching culinary adventure and education shows over competition shows.  (Yes, I’ll admit that I’ve never even sat through a full episode of Bravo’s Top Chef.) 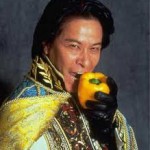 However, I’m certainly not knocking such programming in the least bit. For me, it’s one thing to be an active participant as a challenger or a judge in a competition…as opposed to being a passive viewer.  I personally had a blast participating in an ACF (American Culinary Federation) group competition on behalf of Le Cordon Bleu Boston back in 2009.

In the end, I’m still a sucker for the original Japanese version of Iron Chef, and still love to catch late night episodes when I can…as the show couldn’t have been more campy.

Basically, at some point, I had decided that I didn’t want to just sit back anymore and  just watch food television.

Instead, I decided that I wanted to actually make food television.

Q: Helmet or no helmet?

For me, personally, I ALWAYS wear a helmet and wear serious protective gear when touring. After all, I want to live to ride another day. It’s not as stylish, but it’s certainly a smart move.

After all…I was in medicine years ago!  I’ll never forget the physical sensation with my fingertips…feeling the tear in someone’s aorta… way back during an autopsy back in medical school. It was pretty sobering as a medical student, as deceleration injuries alone can be fatal.

Imagine what a smack to your skull or your spine would do. Sometime, ask a radiologist to show you some films of a motorcycle accident.

However, I am about common sense and freedom of choice, as opposed to having helmet laws dictate what we can and can’t do.  If everyone was responsible enough to wear a helmet, I bet no law would be needed.  Like it or not, laws are sometimes in place to protect us from ourselves.

Motorcycles are as safe as you operate them.  This means, please go take a MSF (Motorcycle Safety Foundation) or a similar course to learn how to ride.  You’ll be surprised, in that the course will help you become a better driver as well.

But if the thought of people chatting or texting on their smartphones while driving doesn’t scare you into wearing a helmet, nothing will.  Both distracted drivers and drunk drivers can kill. That’s reason enough to wear one. 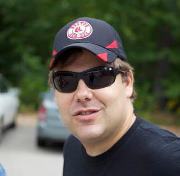 A: You bet. Although I originally grew up in New York, my family also lived in Great Barrington, MA since I was eight. Currently, I live in Cambridge, MA and I usually walk home after a game at Fenway.

Heck…I’m proud to still have my Yaz, Jerry Remy, Jim Rice, Bill Buckner, and Bill Lee baseball cards.  Other kids in New York didn’t want them, so I happily snatched them up.

My side of the family is comprised of die-hard New York Yankee fans. After all, my parents and grandparents grew up in the Bronx.  But that’s another story for another time, which would require plenty of bourbon.

As a Red Sox fan, it’s your lot to face plenty of heartbreak. Yes, people remember that the Sox broke “the curse of the Bambino” and enjoyed the 2004, 2007, 2013, and 2018 World Series wins. But in contrast, many people forget September 2011’s spectacularly horrific Red Sox implosion, when Game 162 in 2011 felt right about on par with 2003’s ALCS Game 7, complete with Grady Little and Pedro Martinez. For better or for worse, with all the cheers and the drama, it’s rarely a dull moment over in the Fenway.