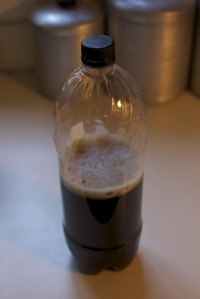 Way back in medical school, I used to drink diet soda until it came out of my ears.  I liked (and still do like) all sorts of fizzy drinks, and hated drinking water.  After all, growing up in a doctor’s household, it was surely safe to drink, right?

Never mind that saccharine (back then) was found to cause cancer in laboratory rats, and cyclamate was banned in Canada.  Aspartame, acesulfame potassium, and sucralose eventually made their way into diet sodas.  The truth about these chemical replacements was never very reassuring, but calories were evil, even if it meant that you were drinking something concocted in a lab.  (Meanwhile, somewhere around that time, companies were quietly replacing sugar with high fructose corn syrup in sodas…which I still believe proved to be a bigger evil…)

Things have changed.  Just as much as my palate has.

Thankfully, I eventually kicked the diet soda habit.  These days, I pretty much stick to tap water, fizzy water, assorted alcohols, coffee, and milk. That’s about it.

Anyhow, what the hell…I haven’t had a diet cola product in ages.  In fact, the last time I remember having a diet beverage was a Dr. Brown’s Diet Cream Soda, in a Jewish Deli in Florida over a year ago. (I wanted a cream soda to go with my corned beef sandwich; should have I gone with aspartame or HFCS?  It was a Hobson’s choice.)

Well, I’m from the school of thought that your palate can really get used to crap.  Well, looking back, this was proof to myself that this was definitely the case.  I couldn’t believe that I used to drink this stuff all the time.

I have to say, that the newer-style diet cola that I drank was pretty cloyingly awful, and it left me just as thirsty as when I started – but with an awful aftertaste in my mouth.  (I’ll leave out the exact brand; that’s not that important but suffice to say it’s a global brand that most people know.  If you’re a new Food Biker reader, you’ll realize that I’m not really into trashing specific people, restaurants, or products…but I will highlight those that are wonderful.)

Need a soda fix?  Save your calories for a vintage-style soda with REAL sugar in it, once in a while for a treat.  I’m a huge orange and cola fan, every few months.  Meanwhile, a sparkling mineral water like Pellegrino, with some fresh lemon or lime isn’t as harsh as club soda and seltzer, and it’s worth a try.

I’m no purist, or one of those hipster food snobs.  However, at Food Biker I’m about going with what tastes good.  Plus, some of the time, you’ll find that what tastes better is ultimately healthier for you in the long run than the fake or mediocre substitutes for the real thing.

I’m glad I tried diet soda again, as I’ve realized that I’m not missing anything.  I just had to wean myself off of a bad habit.

The rest of what remains in my glass, and in the bottle, is going straight down drain.  I’m not even saving it to mix with Mentos® to kick-it Mythbusters geyser style.  (The geyser thing is really pretty cool, though; I’ve done it before.  It’s a “do-it-once-and-wow-the-kids” kid of thing.  Even if you’re a grown-up kid like myself.)

Let’s not let America go down the drain by continuing to imbibe crappy fizzy drinks.  We can do better.  So much better.