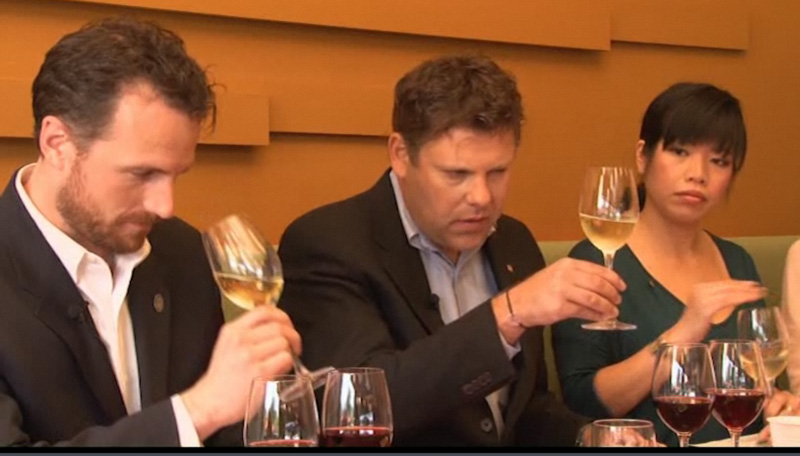 You bet your sweet bippie that I’m actually drinking on television.

Seriously, I’m thrilled to announce that my talented friend, colleague, and fellow member of the Boston Sommelier Society, Ron Quint, has just started a TV show called “Wine Inside-Out TV.” On the show, Ron and his cast explores the world of wine. (Not a bad way to help a friend kick-off their TV series?)  Although it starting out as a local show, apparently it’s now been picked up in Maine and Wisconsin…and the distribution continues! What’s the gist of the program?  As Ron puts it:

“Wine Inside Out TV features top wine professionals who take a multi-sensory approach in evaluating the appearance, aroma, and taste of three delicious wines in a semi-blind tasting.  In doing so, our expert tasting panel reveals each wine’s broad attributes, key characteristics, and flavor descriptors, giving our audience a real framework to learn about the world’s wine regions and styles in an unbiased way.  Our featured guests also discuss other aspects of their wine life to make the experience interactive and fun.”

Well, I can say from personal experience, that it’s a blast to be a cast member of Ron’s show, and you can currently watch Episode 1 here (just click on the triangle in the large, upper-right window; you’ll need Adobe Flash Player to view it.)

I will admit that in filming Episode 1, taming my own nerves was a bit of a challenge.  It wasn’t really a fear of being on camera that kept me a bit on my toes (Given that I’m hosting Food Biker, I’d be in the wrong business if I was camera-shy!), but rather it was a fear of exposing some gaping hole of wine knowledge that I might lack. (Think of it like one those test-taking nightmares, where the tested topic isn’t what you studied for.) As the culinary world, there’s always so much more to learn in the wine world and you never quite feel like you know it all.  Then again, that’s to be expected.  Someone will always know more than you, and you simply can’t know everything or have tasted every wine.

When you watch Episode 1, you’ll see me sandwiched in between two people that I’m honored to call both my friends and colleagues (see the top photo above). On the left is award winning sommelier Michael Meagher, the chairman and founder of the Boston Sommelier Society.  On the right is certified sommelier and mixologist extraordinaire Noon Inthasauwan, partner and beverage director of Umami restaurant in Brookline, MA.  In addition to Ron, to say these two are talented is an understatement.

If you look carefully, all three of us panelists are wearing our Court of Master Sommeliers pins. Michael is a Level 3, and he’s shooting for Level 4 (Master Sommelier). Noon is a Level 2 (Certified Sommelier). I’m the guy in the center with the small Level 1 pin, and I felt a bit like a “Single A” baseball player who’s sitting between two MLB veterans. (Gulp!)

Then again, by the end of the filming, I certainly relaxed a bit (no, it wasn’t the wine!), caught my groove, and I just couldn’t wait for Episode 2 to film.

Although Wine Inside-Out is only currently broadcast locally in the Boston area, viewers should be able to watch streaming episodes directly from the Wine Inside-Out website. Episode 3 should be filming next month sometime, and Ron says that he may have some fun surprises up his sleeve.

Let’s raise a glass to Ron, his crew, and fellow cast members – and congratulate them for bringing Wine Inside-Out TV to the screen. Cheers!