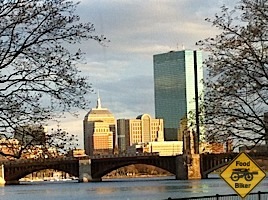 The Red Line back in service on late Saturday afternoon, on the Longfellow Bridge.

East Cambridge is my home, and is where the main events involving the Boston Marathon Bomber manhunt took place, aside from Watertown to our west. If you watched the news coverage on that Friday, you’ve seen my neighborhood. Through the closed walls and windows, I can still hear the mosquito-like F# note of the helicopter whine, and I badly wanted it to go away.

It’s now Sunday as I write most of this, and I’m still trying to process the stressful events of forty-eight hours ago, let alone of the past week. It turns out that the Marathon Bombers had lived right up the street on Norfolk Street, and the shooting and carjacking happened right here in my neighborhood over in the other direction.

This past week, like many after 9/11, I turned to comfort food to cope. I needed to do something with my hands to distract myself and try to assert some control in my life, and preparing beautiful and comforting food is something I’ve been formally trained to do as a chef.

Upon hearing the news of the actual bombing on Marathon Monday, I robotically made chicken paprikash with wide egg noodles, roasted some broccoli with garlic in olive oil (dressed with lemon juice and freshly grated Parmigano-Reggiano), and finished off a bottle of Basil Hayden’s whiskey. I was already upset to have learned the day beforehand that a friend had been killed in a terrible motorcycle accident. (However, my friend Motzie deserves his own story, which will be published here on May 1st.) Like the rest of Boston, I had pushed through the week and focused on whatever needed to get done. 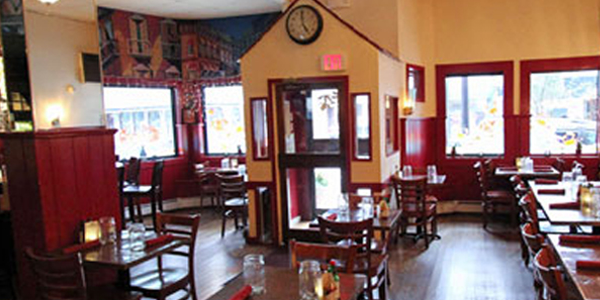 On Tuesday, the night after the bombing, I walked up the street to dinner at Tupelo restaurant for some wonderful Southern-influenced comfort food of pimento cheese, deep-fried cheese grit cubes, honey-dipped chicken wings, cornbread with butter, fried chicken, collard greens, cole slaw, and Tank 7 beer on draft. My server Bryan could tell I was stressed, and he lifted my spirits with both attentive service and good humor. It was just what the doctor ordered. I now realize in horror that at that very moment, just hundreds of feet away from where I sat, the suspects may have been in their apartment, plotting their next moves. On Thursday, I wrote and posted the article “We’re Okay, Thanks,” as I genuinely thought that things were slowly getting back to normal. Upon posting it, I walked around the block to Carl at New Deal Fish Market to buy some littleneck clams and giant hake loin to make a creamy, traditional New England clam and fish chowder to honor of our plucky Patriot and seafaring heritage. Carl always has outstanding fish and seafood, let alone a wonderful smile and a few moments to chat, no matter how busy he is (and he’s always busy). As for the chowder, given that the French helped us out greatly during the Revolutionary War, I had no compunction substituting leeks and shallots for onion. (Plus, potato and leek soup? It’s a winning French combination.)

On Friday morning at 6:30am, the radio alarm clock clicked on with the WBUR morning news, giving explicit and frightening instructions to stay indoors and to lock the doors, followed by a “Code Red” emergency robocall with the same information just a few minutes later. Events outside here were being broadcast via TV and web around the world, although I wasn’t allowed to even open the door. We really didn’t know if a madman with an IED strapped to his chest was running around outside. It was hard to know what was exactly going on. Meanwhile, as some of you have seen on the Food Biker Facebook page, I joked that I “Kept Calm and Made Bacon.” (I wasn’t aware that a meme had already circulated around the Internet with this spin on this phrase.) In fact, I also made strawberry pancakes, and served them with local Grade B maple syrup and cappuccinos.

You all probably know the other key details of Friday, by what you’ve seen or read about this unprecedented manhunt, so there’s no need to recap all that here. However, given that we were ordered to remain indoors, the “lockdown” dinner that evening was prepared of on-hand ingredients: bison meatloaf (with Beekman 1802 Blaak Onion Jam), mashed potatoes, a mixed-green salad, and a bottle of Grand Cru Saint-Émilion.

And then they got the guy.

On Saturday evening, to de-stress and celebrate the conclusion of this nightmarish week, I went over to Chef Dante de Magistris’ restaurant Dante in my neighborhood last night for a knockout dinner, not to mention to help boost our local economy. (As businesses had been shut down everywhere, it particularly hurts a restaurant when you have to close.) As on Tuesday evening at Tupelo, our similarly outstanding server Jeff promptly proceeded to soothe my jangled nerves with the following delectable feast: The light of the setting sun reflected off of buildings across the Charles River in Boston, casting a warm glow of the “golden hour” back on my fair town. A bride and groom were being professionally photographed right outside the window. Dante’s food was outstanding as usual. The Red Line T rolled on its tracks across the Longfellow “salt-and-pepper” bridge, with MBTA service having been restored. As soothing beats of Kaskade softly played in the background, I eventually found myself starting to relax with great food and great company.

It’s now Sunday. I ventured out again this morning with a trip to the supermarket, and it felt good to be outside. I came back home and made fried egg sandwiches with extra sharp cheddar cheese and sausage on English muffins, along with Sumatran drip coffee. This afternoon, it was homemade onion dip, with freshly peeled carrots and celery, followed by a half of a homemade English muffin pizza. Tonight will be chicken caccitore with spaghetti; I just butchered a whole chicken for the braise.

It’s been a long week of lots of comfort food, which blanketed with the sour tastes of sleepless nights, dry mouths and gritted teeth, and chalky antacids. I now recognize that this has all been incredibly frightening, no matter how tough I think I am. I realize that I had pushed my fear aside during Friday’s crisis, but it’s really hitting me now. Again, this happened right here in my neighborhood.

I can imagine that many Americans were largely glued to their TV sets on Friday, watching the events unfold for them on the TV news like some sort of surreal police drama. However, when something like this happens in your neighborhood, and you’re told to barricade yourself indoors and not open the door for anyone except a uniformed police officer, it’s a bit scary and traumatizing if you live here. Although I ultimately rejoice in that justice may ultimately prevail here in Boston, particularly in light of the capture of the second suspect, it’s not all a cause celebration. Wrapped boats on the Charles River… just like the one the second suspect hid in over in Watertown.

I feel that my quiet neighborhood of East Cambridge had somehow been violated.

In American history, none of us have ever heard of such a “lockdown” before.  Like my fellow resilient Bostonians, I was able to push through and accomplish many tasks last week. We go on. However, the experience really felt a bit like 9/11. I’m guessing that on some level that I’m unconsciously unaware of, it will take some time to recover. I now jump when I hear helicopters or sirens outside. I hope that those reactions will quickly fade. In fact, particularly with Food Biker™, I’m really looking forward to riding around America, and meeting fellow chefs and other Americans all around our great country. In my encounters, maybe I’ll wind up becoming an incredibly minor and informal ambassador for our fair city.

I will, like my fellow Bostonians, will “B-Strong,” de-stress, and celebrate the springtime with some badly needed closure.

At least I’m comforted by the truth that ultimately, you don’t mess with Boston and get away with it.

(Meanwhile, I’ll have another serving of carbs, please.)