It’s happened to some of you before. I’m sure of it.

You’re standing there in your rental apartment, minding your own business, and something decides to break while in the middle of doing something.

But have you ever have a cabinet shelf fail, seemingly out of nowhere? I was standing there, baking a beautiful Bundt cake, using Ina Garten’s “Beatty’s Chocolate Cake” recipe with a simple buttercream frosting.  (If you haven’t tried it, it’s a fantastic chocolate cake recipe.)

Well, the mixer was on, as I was creaming the butter to make the frosting.

Now I’m guessing, that due to possibly microscopically minute vibrations radiating up to the cabinet through the wall, one of the shelving supports failed.  Out tumbled a good portion of the dishes from the cabinet, onto the range and the floor. Unfortunately, there were few survivors.

Even the KitchenAid plastic nut (where the grinder attachment goes) was destroyed, not to mention one of the plastic knobs on the stove.

I don’t think that I’ve heard a crash like that in my life. 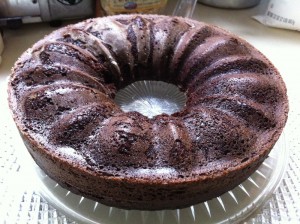 The cake was safe, but the frosting was not.

Anyhow, I was undeterred.  The cake was positioned further away and was salvageable, as I carefully scrutinized the cake and painstakingly removed the few flecks of broken dishes.  (If it were glass, I would definitely have thrown it out.)  As for the frosting, it was time to pitch it all and start over as it was too close to the impact. From a food safety standpoint, you don’t ever take chances like that in the kitchen. Any question it’s unsafe to eat? Just pitch it out and start over.  Don’t take a chance. It’ll be better next time.

Cleaning up a mess like that can be daunting, but the best thing to do is to just jump in and get started. Back in culinary school, there were plenty of times that you had to trash what you did and start over.

So start over, and get it right the next time. Accidents happen in the kitchen, so be prepared.

Frankly, maybe it took a half-hour to take care of and fix the mess.  As for the buttercream frosting, I swear – there’s simply no excuse for anyone to buy frosting out of a can these days. Buttercream frosting is the easiest thing in the world to make (we’re pretty much talking creaming some room-temperature butter and confectioner’s sugar, with variations starting from there).  I was quickly back in business.

By the way; why didn’t I do a double 8″ pan recipe?  I didn’t want to be tempted by much cake sitting around the house.  However, a single pan seemed a bit lonely;  a Bundt pan seemed like it would offer a bit more height, so that’s how I decided to roll.

By the way, where the recipe calls for hot coffee, try a few shots of freshly brewed espresso instead. Don’t worry.  Neither will make your cake taste like coffee-flavored cake. It it’s there to greatly enhance the chocolate flavor.

Anyhow, by the time the frosting was done, I felt a bit guilty that I didn’t do a “crumb coat” (aka, “dirty icing”, a term my baking instructor hated ), as I had pretty much had it by that point in the afternoon. What’s a “crumb coat,” you ask?  If you want incredible, professional looking results, you do a thin layer of frosting first, and then refrigerate it for about 20-30 minutes.  Let it set.  Then, you put your final coat on it.  I swear, it’ll make your cake look exceptional and professional.

Finally, I shaved some 54% semi-sweet Callebaut (the choice of the pros; I swear by it) and sprinkled it on top (which I had shaved a little bit too finely to my taste, I might add), and it was ready to go.

So the next time you have breaking news, don’t sweat it.

Clean up.
Start over.
Make it happen.

Because, remember that it’s just food.
You can always make more. 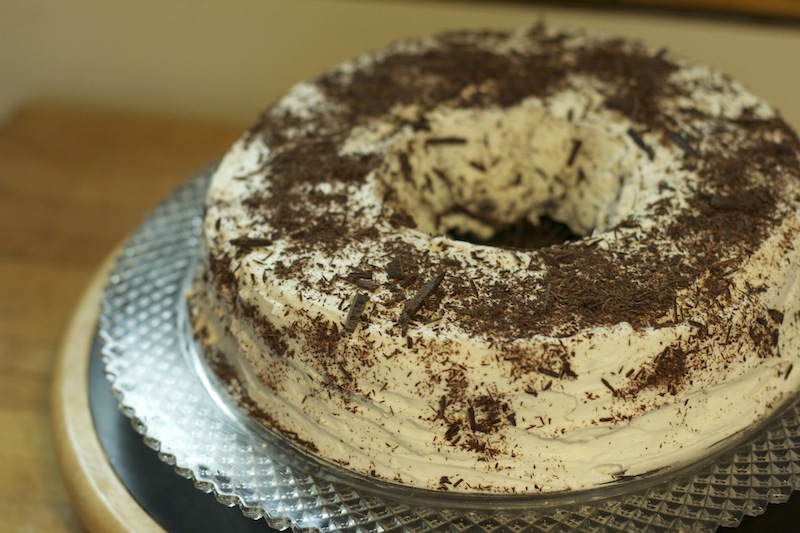 Not bad, once all was said and done.