Here’s Part 3 of a 5-part series on our Food Biker™ filming at Beekman 1802 and Sharon Springs, NY, during the annual Garden Party festival weekend.

Each article offers a different perspective of our trip, as written by individual Complete Breakfast Productions crew members. Brent and Josh during Food Biker™ filming. These two are just as humorous as you think they are.

I’m a city girl at heart. I specifically chose to go to school in Boston because I was seduced by the hustle and bustle of the place over one fateful Fourth of July weekend. But even if you love the whir of the “T” (our often-cursed subway system) and the masses of people you’ll find on every sidewalk, once in a while you’ve got to get the hell out of Dodge.

With views like this, how could anyone not be tempted to move to Sharon Springs, NY?

That’s why, when I met Food Biker and heard the words “farms”, “free food” and “Garden Party”, my mind was already made up. I would accompany him and his crew to road trip to Sharon Springs, New York where the Fabulous Beekman Boys live and work.

The drive into Sharon Springs was breathtaking. It’s been a long time since I’ve seen such gorgeous and peaceful scenery. Rolling hills covered in miles of green grass, and pockets of trees as far as the eye could see. Cows roamed here and there between beautiful barns and old country houses. The air was clean and the sun was hot–not a bad way to start your morning.

What struck me most about the trip, more than the beauty of the place, what just how hospitable and wonderful the people were. We started our journey at a restaurant called 204 Main. Expertly decorated and sporting a sophisticated menu, I was thrilled to go behind the scenes to see first-hand how the kitchen cooked up its popular fare. 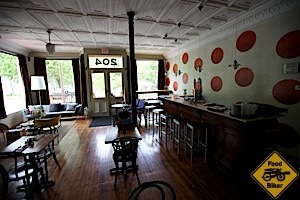 The wonderful space at 204 Main.

Without even waiting to be asked, Chef Norm Phenix served the entire crew an outrageously tasty three-course meal. The highlight for me being the homemade, hand cut noodles (which I had watched Norm make literally minutes before) served with shrimp and local vegetables in a soy butter sauce. The quality of the ingredients was absolutely top notch, especially the huge shrimp. Other dishes included tacos with avocado–so good, that the crew almost turned against each other for more–and an amazingly delicate lemon and berry custard cake for dessert. Are there jobs available for goat masseuses?

The latter part of the day was spent in the company of the Fabulous Beekman Boys–Josh Kilmer-Purcell and Brent Ridge–and their dog Önder (Get it? It’s pronounced “under” dog!) We were treated to a tour of their picturesque farm (sign me up for that life); got to meet their many adorable goats (where I learned that I may have a future career as a goat masseuse); and finally, we were graced with the presence of their famous and fabulous llama, Polka Spot.

Not knowing much about the Beekman Boys before the trip, I was immediately a fan after meeting them. Such generous and talented men, skillfully building the local economy by creating delicious food using products from their and other local farms. Their heirloom tomato sauce, soaps, home goods and their most recent venture-goat milk ice cream–are all amazing. (Spoiler alert about that ice cream: It was mind-blowingly creamy. There wasn’t a single flavor I didn’t like!)

Josh and Brent have worked so hard to build their business and expand that good fortune to build businesses in Sharon Springs–and that was clearly evident the next day during the town’s Garden Party. The Garden Party consisted of a network of local vendors stationed all along the town’s main drag. Visitors from all over came to shop for things like couture cakes, jewelry, rustic picture frames, barbeque, handmade Christmas ornaments, Greek food, and fairy wings among other things. Music from local performers filled the air and the food samples were a-plenty. Locally made jewelry – Shopping you can feel good about.

Every vendor sung the praises of the Beekman Boys and how they represented Sharon Springs. Then again the people were highly complimentary and well versed in the art of flattery. One kind woman, upon seeing the size of the camera we were filming with yelled out, “That camera must weigh more than you!” Having been stuffing myself with noodles and cake all weekend, I took that comment the bank. Önder under the trees and in the shade.

I even got love advice from a wonderful older woman from Mama Shep’s Barbeque stand who was celebrating her 50th wedding anniversary. She was a woman who had plenty to say and loved a lengthy chat, but I was content to sit and listen for as long as I had Mama Shep’s delicious and perfectly seasoned barbeque pork pita sandwich in front of me. I was also keen to learn how this kind woman had gotten her husband (whom she referred to as “my Herbie”) to buy her so much gorgeous jewelry over the years! I’ll crack that code yet!

The weekend continued on much in that calm and friendly vein until it was time to pack up and leave. Kind and enthusiastic people, tasty fresh foods and perfect landscapes are what I’ll take from Sharon Springs. It’s a place I hope to return to and somewhere strongly encourage any traveler to visit. Might I suggest their annual Harvest Festival at the end of September or their Victorian Holiday in December? Visit www.enjoysharonsprings.com for more information!