Here’s Part 4 of a 5-part series on our Food Biker™ filming at Beekman 1802 and Sharon Springs, NY, during the annual Garden Party festival weekend.

Each article offers a different perspective of our trip, as written by individual Complete Breakfast Productions crew members. 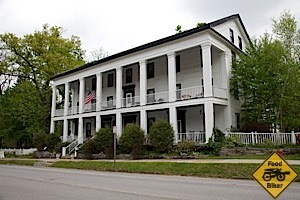 Doug and Garth’s American Hotel. According to Food Biker™, it’s the home of the “foraged martini.” I’ll be honest­—it was a rough morning, as I had only gotten a few hours of sleep the night before. I think it was the anticipation of the day’s jam-packed coverage. I arrived into town around 7AM, and the crew met up at the Black Cat Café for a bite to eat before starting the day. Let’s just say that the entire crew was running on many, many, many cups of coffee, and Food Biker himself probably had the most! (I think he was pretty wiped-out from a very busy production day previous.) Although I didn’t have the house-made corned beef and eggs, which Food Biker was happily scarfing down, I followed his lead in similarly enjoying one of the Black Cat Café’s freshly homemade cake donuts. Sweet.

I joined the crew a day late because of my busy schedule back home, and I’m almost glad I did! Everyone seemed to be exhausted from the run-and-gun shooting from the day before, but all that coffee got everyone back on-game. The morning was packed with drive by shooting (no, not that kind of drive-by shooting!!) of Food Biker on the bike, motoring along the country roads of Sharon Springs and nearby towns. 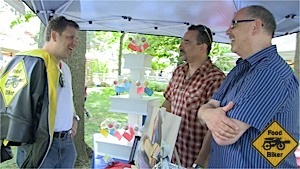 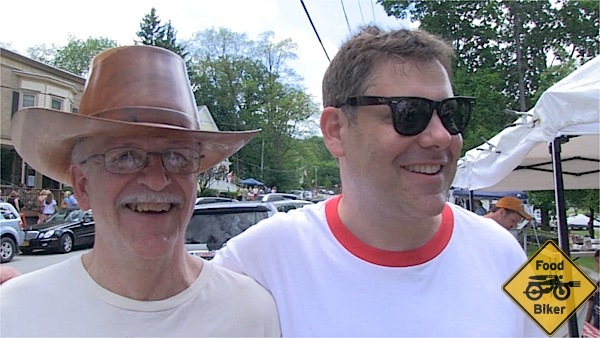 Yes. That hat is made out of WOOD.

It was a gorgeous day, but a hot one, and let me tell you, as a shiny-headed cameraman, I should probably invest in a hat to save the crew on sunblock costs this summer, because I lost count of the sunblock applications that day! After our open road filming, we headed back to the town of Sharon Springs for the Garden Party Festival in the beautiful park near the town center, close to The American Hotel (what a beautiful historic building!) The Garden Party was fun—and delicious—everything from maple syrup cotton candy to a cake company making cake lollipops to home-canned goods like bread and butter pickles and assorted jellies and jams. Mama Shep, the local BBQ queen, had delicious pulled pork sandwiches with slaw that totally hit the spot during the crew lunch.

The afternoon, we had more time to capture the vibes and events happening in town. There was a man who had a wooden cowboy hat on his head that he explained he had made out of a solid piece of wood from a fallen tree. (Look for footage of him in an upcoming episode.) Sharon Springs made me feel very welcomed, and I hope to be able to go back to this beautiful town.