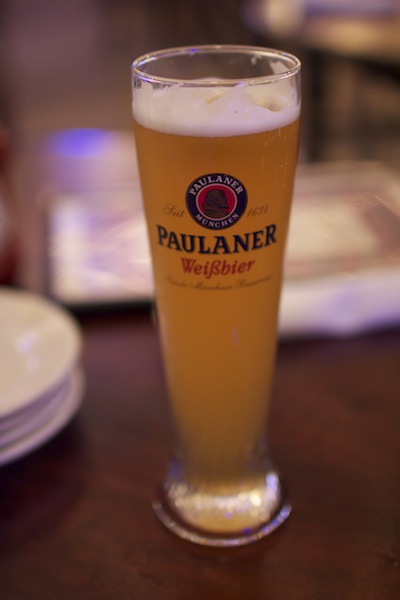 I’m sure that many of you guys know that I’m, what I call, a “BBBB” kind of guy.  I’m not talking about BBB, though.  (That might be the “Better Business Bureau”, or “Bed, Bath, and Beyond.”)

We’re talking about four of my favorite things: Bikes, Beer, BBQ, and Bourbon.

On Food Biker, we’ll surely explore all four of these wonderful areas, among all sort of other topics.  (In fact, if all goes to plan, I’ll be enjoying the latter three of these late tonight.)  However, once can’t live on such things alone.

Many of you know that I’m also a bit wine obsessed.  (Yeah…You have to be a bit touched in the head to fly to San Juan in a tropical storm to go take a Sommelier Exam.)

Now hang on there!  Don’t close this window.

Don’t tune out now. Trust me. You’ll miss out.
Besides, there’s a reason why there’s a beer photo and not a wine photo here.

Meanwhile, ponder this fact:  Wine is just another beverage that has alcohol in it.

Sit with that for a minute.

Next, as far as I’m concerned, everyone should ultimately drink what they like.

If you’re hanging out with people who actually judge you by what you’re drinking, then you’re probably hanging out with the wrong people.  That’s incredibly different than sharing a common interest with others. Who cares what other people say?  It takes courage to be your own person and do what you like.

With regards to beer, check out the photo above, of this beautiful Paulaner hefeweizen.

Yes, I put lemon in it.
Yes, I know that people in Germany don’t generally do that.

Do I care?
Not one bit.
(In fact, Germans sometimes put lemon in filtered weiss (wheat) beer, called kristallweizen, as opposed to the unfiltered hefeweizen above.)

Why don’t I care?
Because…I drink what I like.  It’s that simple.

Don’t like the taste of wine?  Well, my guess is that you probably haven’t been exposed to a wine that you like yet.

Heck, it’s generally a lot less expensive to go try out a bunch a different beers to find what you like, as opposed to wine, right?

Not so much anymore.  Times have changed.

Are you a tough guy who likes sweeter wine, and are afraid that people will think you’re “soft?”  Again, who cares what others think?  Although I’m generally a sucker for a highly acidic dry Riesling, I enjoy Sauternes, Bergeracs, and Loupiacs — all of which are ridiculously sweet.

And I still ride.
And I still drink whiskey with the best of them.
And sometimes, I’ll still unabashedly drink a pint of whatever light beer is on draft…especially if I’m ordering a really strong pizza with garlic.

I’ll even admit that I’ll occasionally slum and eat a fast-food cheeseburger.

I’m afraid that it’s elitist food and wine snobbery that put such things off for rest of the public.  Too many people their knowledge as a curtain, behind which they try to hide their insecurities.  Instead of welcoming, they come across as intimidating.  This breeds anti-intellectualism.  Not good.  That’s a far cry from sharing one’s knowledge about what you’re passionate about, which breeds enthusiasm and brings us all together.

Trust me. If you stick around, we’ll find you something you like in the “elevated” food and wine world. I promise that you won’t look like some sort of wuss, an elitist snob, or an egghead in the process.

If you’re a tough guy, it won’t challenge your masculinity. Instead, it’ll show others that you’re secure with who you are. (Trust me. People dig that sort of confidence and well-roundedness.)

Finally, it won’t empty your wallet in the process.

Just hang in there with me, okay?  There’s a lot to explore in the food and world, that complements a love of BBBB.

Besides…The best thing you’ve ate or drank…you probably haven’t had it yet.  Neither have I.

And neither of us will go hungry or thirsty.